The caveman guide to health: Going Paleo means more than the diet.

What does a caveman know about nutrition and health? If you have been paying attention to a recent health trend, the popular Paleo diet, being more like a caveman might just be the answer to good health. It turns out that there is good reason to think that following at least some of the caveman’s advice is beneficial. This is the topic of my Health & Fitness column in the Aiken Standard this week. 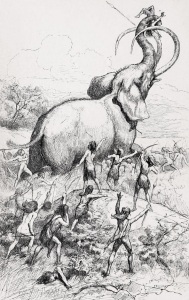 When I mention “cavemen,” I am referring to our hunter-gatherer ancestors who lived in the Paleolithic era. This era ended around 10,000 years ago at about the same time that agriculture became widespread. As hunter-gatherers, Paleolithic men (and women) spent a large part of each day foraging for edible plants and hunting animal prey. Their diet consisted largely of raw plants and meat and they accumulated hours of physical activity each day. This caveman lifestyle is the foundation for the Paleo diet.

The Paleo diet has been increasing in popularity in recent years, thanks to the books, movies, and exercise programs promoting it. While there are variations among the different diet plans, the Paleo diet typically consists of food that can be hunted or caught, such as meat and seafood, as well as food that can be gathered including vegetables, fruit, nuts, and eggs. Grains, legumes (beans), and dairy products are restricted since these foods were not commonly consumed by hunter-gatherers. Most processed foods such as refined grains, added sugar and salt, and many added oils are also avoided. Many who follow the Paleo diet choose to eat meat from free-range or grass-fed animals and raw vegetables since that more closely resembles what was eaten by early humans.

Proponents of this diet claim that it can prevent or cure modern diseases such as obesity, diabetes, cancer, and heart disease. Since modern humans have the same genes as our late Paleolithic ancestors, the thinking is that our current diet is to blame for these chronic diseases. Scientific studies on the effect of our modern diet on health support this claim as do studies of the few remaining hunter-gatherer cultures in which these conditions are rare. This belief is also supported by that fact that many who follow the Paleo diet lose weight and enjoy improvements in health.

However, there is no good evidence that the current Paleo diet has specific properties that make more beneficial for weight loss or health than any other well-balanced diet. The nutrient content of the Paleo diet is higher in protein (20–35% of calories) and lower in carbohydrates (20–40%) than is commonly recommended for good health. There is some concern that following the Paleo diet too strictly could result in nutrient deficiencies (calcium, for example) or energy intake so low that it is unhealthy. Additionally, the restrictive nature of the Paleo diet makes it difficult to follow. In particular, avoiding grains, legumes, and dairy products is both challenging and unnecessary for good health or weight loss.

In addition, the focus on the diet alone ignores the important effect that the very high level of physical activity our ancestors experienced has on health. Almost certainly, our low level of activity is at least as important as our current diet in explaining obesity and other chronic diseases in our population.

So, follow some of the caveman’s advice and eat lots of fresh fruits and vegetables, lean meat and fish, and limit your consumption of processed foods. But there are health benefits from eating whole grains, legumes, and dairy foods even if the caveman did not. And be sure to follow the most important lesson from our hunter-gatherer ancestors: Be active every day.