From Worse to Bad: Moving in the right direction even if your health habits aren’t perfect

Recently, someone told me that her sister was quitting smoking by switching to e-cigarettes. “Isn’t that bad?” she asked. I told her that, sure, smoking e-cigarettes was bad but that smoking tobacco cigarettes was worse, so she was making a positive (and hopefully temporary) change. The benefits of making changes to health habits, even if they aren’t perfect, is the topic of my Health & Fitness column in the Aiken Standard this week. 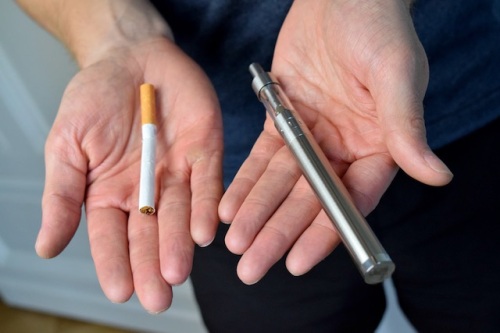 It is no secret that smoking has serious negative health effects. Cigarette smoking more than doubles the risk of heart disease and stroke, is by far the leading cause of lung cancer and other lung diseases, and is responsible for nearly 500,000 deaths per year. If you smoke, quitting now is probably the most important step you can take to improve your health.

But quitting smoking is difficult. Obviously, there is the addictive nature of nicotine that makes smoking cessation challenging. Beyond the drug effect, smoking also has a behavioral component. This includes what a smoker does first thing in the morning, after a meal, or on a work break as well as the act of holding a cigarette in his or her hand. Add to that the social aspects of smoking, including the influence of friends and family members, and it is easy to understand why it is a difficult habit to break.

Nicotine replacement therapy in the form of gum, lozenges, and patches as well as prescription medications can help with withdrawal symptoms. Nowadays, many smokers are turning to electronic cigarettes (e-cigarettes) to help them quit. The research on the effectiveness of using e-cigarettes to quit smoking is mixed, with some studies showing a benefit, some showing no real effect, and others suggesting that e-cigarettes actually lower the quit rate.

So, switching from smoking cigarettes to e-cigarettes is making a move in the right direction, from worse to bad. And if using e-cigarettes helps a smoker start the quitting process it is probably a good idea. Obviously, not smoking at all is the goal, but this may not be reasonable for everyone, especially in the beginning. When it comes to improving your health, doing something is better than doing nothing, even if it isn’t perfect.

This obsession with being perfect extends beyond smoking cessation. There is a perception that if the diet or exercise program aren’t the “best,” they won’t be effective. So, many people struggle to find the perfect diet before trying to lose weight or wait to identify the best workout before starting an exercise program. This can lead people who need to become more active or change the way they eat to delay starting the process. And it is almost always a long process.

There are very few people who can change difficult habits quickly and easily. Even the people who make it look easy will tell you that developing a healthy lifestyle is a series of steps and missteps and that positive changes accumulate over time. The lesson is that getting started on improving your health now is more important than achieving the perfect outcome right away.  Just like switching from tobacco cigarettes to e-cigarettes isn’t the ultimate goal, making positive changes to your diet and exercise habits can have benefits now and give you a foundation from which to make more significant changes later.

For example, drinking water instead of sweet tea or soda when you eat lunch at a fast food restaurant is a good start. Obviously, the goal would be not to eat fast food meals, but modifying those meals will cut out some unhealthy choices. Similarly, going for a 10 minute walk after dinner instead of watching television is a step (literally!) toward a goal of less sedentary time longer exercise sessions. Neither are perfect, but you should recognize both as positive changes that move you away from behaviors that are worse.